This post builds on my last: Alternatives to model diagnostics for statistical inference?, where I had claimed that we could make quality inferences about the best linear approximation to a quadratic relationship. The R code below implements such a scenario, to establish a framework for discussion. I have inserted comments to augment the code.

The figure below illustrates the true quadratic curve and the best linear approximation (pop_fit), overlaid against 10000 samples. 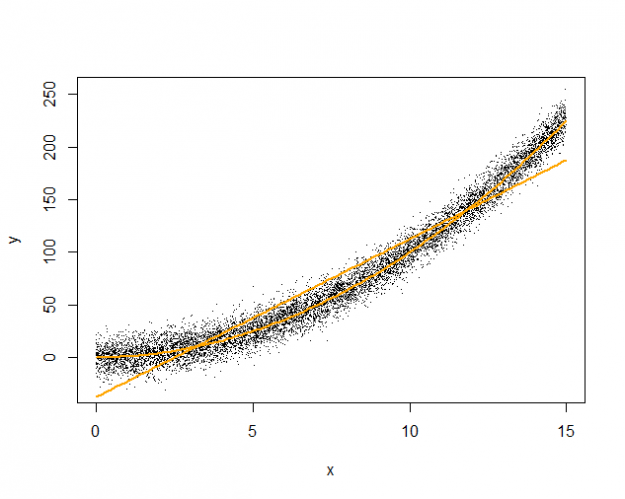 The code above illustrates that if we had access to a population, we can adjust the coverage of a confidence region to be correct. The animation (created using Yihui's animation package) below illustrates the original and corrected confidence regions for ten different samples of size 20, overlaid against 10000 sample estimates of a and b. Unfortunately, we don't generally have access to the population. Hence, the adjustment must be made by an alternative, empirical, mechanism. In the next post, I will show how to use iterated Monte Carlo (specifically the double bootstrap) to make such an adjustment.